Emission of Greenhouse Gases from Eutrophic Lakes: What’s the Solution?

A recent study published in the journal Limnology and Oceanography Letters was the first to uncover that the size of lakes and the presence of nutrients directly influenced the levels of greenhouse gases that are emitted from the water body into the atmosphere. While it was previously understood that greenhouse gases were released through both natural and constructed eutrophic lakes, there was no knowledge regarding the differences in the emissions rates of these gases based on the sizing and productivity of the lake.  The study concludes that shallow water bodies emit significantly higher amounts of greenhouse gases.

Through the use of satellite and sensor technology, detailed geographical data on lakes, global lake observations and statistical surveys, researchers not only discovered the effects of lake sizes and productivity on greenhouse gas emission, but then used this data in relation to global lake sizes and productivity distributions in order to get a more accurate assessment of annual greenhouse gas emissions. Using this information, researchers have concluded that previous estimates were inaccurate and that effects of aquatic greenhouse gases emission is close to 20% of fossil fuel emissions and will continue to increase as lakes become more eutrophic. Ultimately, if the world’s lakes and other surface water continue to become more eutrophic, the level of greenhouse gas emissions could negate any reductions made by reducing fossil fuel emissions. 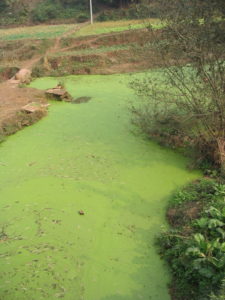 One of the key drivers of global climate change is the release of greenhouse gases into the atmosphere. This study revealed that lakes and other shallow water bodies are significant emitters of CO2, CH4, and N2O. According to lead author Tonya DelSontro, their work shows “conclusively that methane, which is emitted from lakes in bubbles, is the dominant greenhouse gas coming from lakes and surface waters globally. The greener or more eutrophic these water bodies become, the more methane is emitted, which exacerbates climate warming." Furthermore, methane and nitrous oxide, both of which are emitted from eutrophic lakes, seemingly have a much greater potential for causing global warming effects.

Eutrophication is the leading global cause of impairment in freshwater ecosystems. In fact, according to a survey conducted by the States of the World’s Lakes, eutrophication affects 40% of all lakes in North America, 54% of Asian lakes, 53% of lakes in Europe, 41% of lakes in South American and 28% of African lakes.  Often characterized by excessive plant and algae growth, eutrophic lakes have become an increasing problem as a result of human activities including both point-source discharges of wastewater and nonpoint loadings of fertilization nutrients, such as phosphorus and nitrogen, which end up in lakes' ecosystems. The excessive plant and algae growth limits oxygen levels, blocks sunlight, creates a foul smell, causes fish kill and overall deteriorates the water quality.

Our Unique and Effective Solution for Eutrophic Lakes

Blue-green algae and weeds overtook the Toa Vaca Dam in Puerto Rico. This drinking water reservoir had become highly eutrophic with increased levels of fish kills. The treatment of raw water coming from a eutrophic reservoir is a real challenge. However, Clean-Flo designed a laminar flow oxygenation system for the reservoir along with a treatment program for bioaugmentation. The system was installed in 2012, and the bioaugmentation products were added approximately four months later. The benefits of our restoring method for the Toa Vaca reservoir are several and verifiable: