Barley straw for ponds does not control algae and does not reduce muck, disease bacteria, odor or weeds and it does not improve fishing, 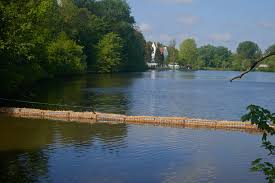 boating or swimming. Barley straw for controlling algae was first publicized in England in the 1990s (1). CLEAN-FLO immediately performed tests on several algae-infested ponds, and water transparency did not increase. In some cases, water transparency declined. We at CLEAN-FLO believe that barley straw is neither an algaecide that kills algae nor an algae-stat that prevents more algae from growing. We believe that barley straw makes a haven for zooplankton that feed on algae, especially when the barley straw is loosely based. We believe that adding barley straw for ponds is just as unfavorable as dumping tree leaves into a lake or pond. It increases the fertilizer in the water.

U.S. Studies
Results at Purdue University (2) Maryland University (3) and Iowa State University (4) showed that some algae species were reduced by barley straw for ponds, while other species did not respond, or increased. Species that increased were mat-forming filamentous algae that zooplankton does not feed on.

Results at the University of Nebraska (5) showed that water quality remained poor and the lake became dominated by blue-green algae, a type of algae that zooplankton does not eat.

So if consultants put barley straw in a pond and kill fish at the same time, they are increasing the amount of zooplankton. The zooplanktons decrease the algae in the pond. The result is increased weeds and a lake that is not swim-able, not boat-able and not fishable.

Real Pond Restoration
Barley straw for ponds does not reduce muck, disease bacteria, odor or weeds and it does not improve fishing, boating or swimming, but Clean-Flo International gives you all these benefits.