Cyanobacteria / blue green algae was controlled in a eutrophic water supply using a reservoir diffused aeration destratification system. The following article describes how eutrophication was corrected to rid the water supply of geosmin caused by cyanobacteria in the drinking water.

Summary of the Feng-Shan Reservoir Project: 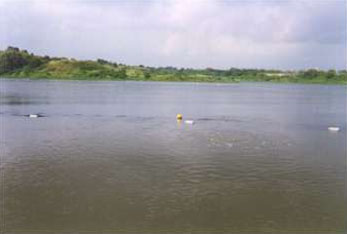 The Feng-Shan Water Reservoir is a 70-hectare (173-acre), 28 m (92 ft) maximum depth body of water located near Kaohsiung, Taiwan. A tributary from a river that has hundreds of pig farms upstream feeds the reservoir. The farmers dump their pig manure directly into the river, and the government is presently powerless to do anything about it. The reservoir has an 11 - 17 hour retention time, before entering the drinking water treatment plant. Polluted incoming water moved straight across the surface to the Water Treatment Plant inlet in less than three hours. The reservoir had a heavy growth of blue-green algae, giving the drinking water a severe bad taste and odor.

Oxygen just below the surface to the bottom was 0.0 mg/l. Ammonia averaged 1.8 mg/l for five years before the project began, and had a maximum value of 3.6 mg/l.

The Taiwan government wanted to rid the drinking water of the bad taste and odor. To accomplish this goal, CLEAN-FLO guaranteed to increase bottom oxygen in the deepest water to 3.6 mg/l, and guaranteed to reduce ammonia by 70 percent. CLEAN-FLO designed the project to remove 1.9 mg/l ammonia at highest flow.

:
To accomplish these goals, CLEAN-FLO designed a flow barrier across three-fourths of the center of the reservoir. This causes the water to pass through the entire reservoir before reaching the water treatment plant. CLEAN-FLO designed a bacterial culture media to span the surface of the reservoir at fifteen locations. This is a multilayered porous polyethylene material which floats at the surface and extends four feet down into the water. It is held in place by floating cables fastened across the reservoir.

Two hundred 0.75 hp oilless piston compressors are located in five buildings on the shoreline, forty compressors per building. Weighted airline connects from the compressors to 400 microporous diffusers approximately evenly-spaced on the bottom of the reservoir. Small bubbles rise from the microporous diffusers at the bottom, creating a non-turbulent flow of 227,000 m3/hour (60,000,000 GPM) of water to the surface. When the water reaches the surface, it spreads out 0.04 cm (0.1 in) thick and flows across the surface. As the water passes through the bacterial culture media, microorganisms lodged on the surface feed on ammonia and phosphorus.

Dicer Environmental Engineering Service of Koahsiung, Taiwan, prepared the engineering proposal for the Taiwan government. Dicer performed all construction work at the job site, with the barrier, culture media and inversion/oxygenation system under the supervision of CLEAN-FLO International, Inc.

By the time Dicer installed the 400th diffuser in the reservoir, the blue-green algae disappeared. This completely removed the bad taste and odor of the drinking water. The Water Treatment Company reduced chlorine consumption from 50 mg/l down to 9 - 10 mg/l. They reported a resulting savings of $583,000 per year in water treatment costs.

Blue-green algae was less in the Feng-Shan reservoir after Continuous laminar flow inversion/ oxygenation. This solved the Water Supply Company's taste and odor problem. Passing the water through bacterial culture media with the help of the inversion system reduced incoming ammonia 2.9 mg/l. Non-turbulent inversion of the reservoir once every two or three hours increased bottom oxygen from 0.0 mg/l to 3.6 mg/l.

The process of continuous laminar flow inversion/oxygenation is a useful tool for blue-green algae control in infested reservoirs and lakes. It removes bad taste and odor from the finished drinking water. In combination with bacterial culture media, ammonia can be effectively reduced. This process reduces the chemicals needed in the water treatment plant to produce finished drinking water. The inversion and oxygenation do not affect blue-green algae in any way, it simply removes the nutrients that blue-greens feed on, and moves the algae to the bottom of the reservoir where it cannot receive sunlight. To cover the increased ammonia level, we have added 176 diffusers.