The following case study shows dramatic muck reduction and organic sediment removal from Lake Harmony in Pennsylvania after only 4 months of the CLEAN-FLO system.

Lake Harmony is a small lake located in the Pocono Mountains in a quaint Pennsylvania town sharing the same name. In September 2017, a sonar scan of Lake Harmony was completed to evaluate the overall health and condition of the lake. The testing generated a contour map, which illustrates the average depth of the lake across its entire area, as well as a map of the bottom composition, which indicates the relative hardness of bottom sediment. Softer composition suggests a higher organic content than hard composition.

Analysis of the Lake Muck problem in Lake Harmony

The 2017 sonar scan revealed that at its deepest, Lake Harmony reached 14.14 feet within a very small 14-foot contour.  Furthermore, the eastern portion of the lake reached approximately 10 feet in a relatively small area, while the northern area of the lake reached only 6 feet. Additionally, the scan demonstrated that the bottom composition was typically softer in deeper areas of the lake.  The chart showing the proportions of soft, medium-soft, and hard bottom indicated that 11% of the lake bottom was soft, 69% of the lake was medium-hard, and 20% was hard. Taken together, the bathymetric and bottom composition mapping suggested that Lake Harmony had a significantly high level of organic muck in its sediment, particularly in the deeper areas of the lake. 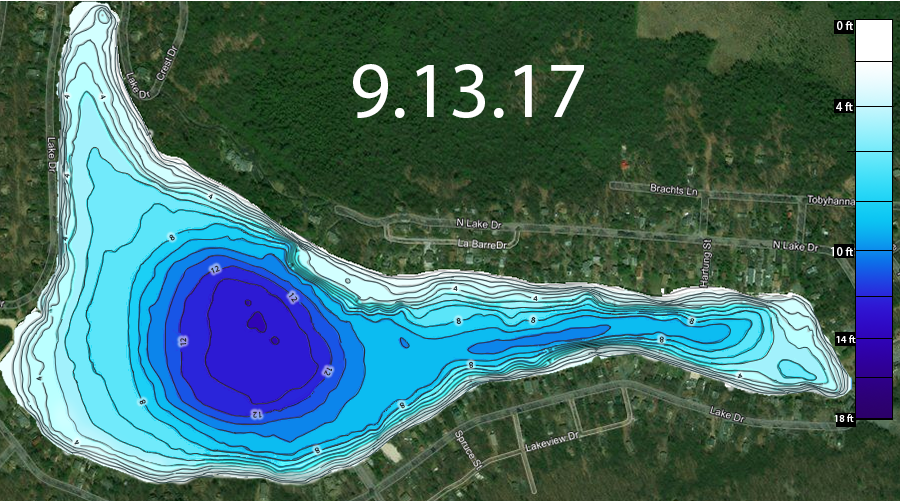 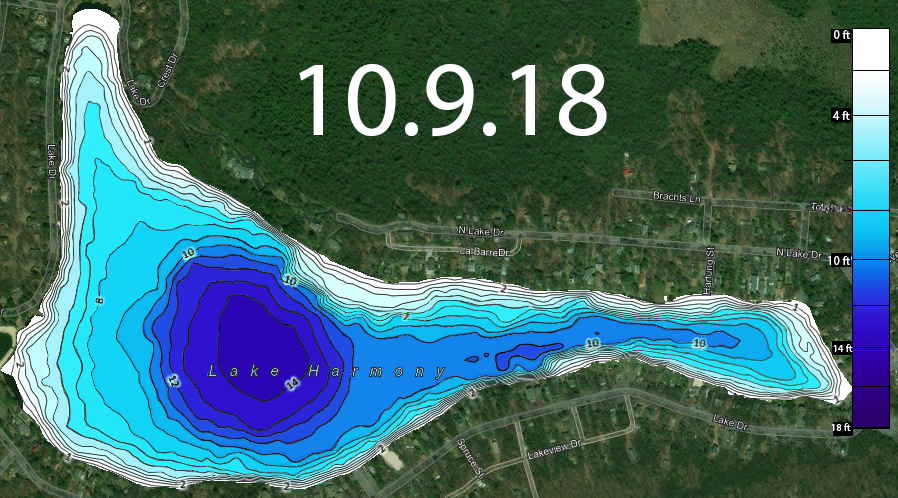 What causes Muck and Organic Sediment Build Up?

Muck and sediment accumulation stems from decaying organic material, such as leaves, algae or animal waste, which has made its way into the body of water. As these materials decompose, the process reduces the oxygen content of the water. Lower oxygen levels in a body of water create an environment in which anaerobic bacteria thrive. These bacteria produce hydrogen sulfide, a smelly gas that is toxic to plant and animal life. Anaerobic bacteria also produce methane and ammonia, which are detrimental to plants and animal growth.

In short, Lake Harmony was undergoing this detrimental process. Over time, organic material had gathered and decayed on the lake bottom. Not only was this causing a decrease in Lake Harmony’s overall oxygen levels, but it also was contributing to a rise in toxic gases, unsightly muck and pungent odors. Clearly, something needed to be done to help clear out the muck and sediment at the bottom of Lake Harmony in order to improve the condition of this body of water.

As a result of the analysis, an inversion oxygenation system and biological augmentation (bioaugmentation) program was designed by Clean-Flo.  Nine months after the 2017 sonar scan was performed in Lake Harmony, Clean-Flo’s inversion-system was installed.  It began operating full-time and the bioaugmentation program began in June 2018. The system worked to increase the dissolved oxygen concentration in the water system, which restored the lake’s oxygen levels to healthier benchmarks. Increased oxygen levels generated by Clean-Flo’s system helped create a balanced environment that is more favorable to a variety of lifeforms including aerobic bacteria, which efficiently breaks down organic materials and counteracts muck and sediment buildup.  The application of biological products accelerated the decomposition of organic matter in bottom sediments and in conjunction with the inversion oxygenation system led to the dramatic results observed after a short time.

In October 2018, four months after Clean-Flo’s inversion oxygenation system was installed and bioaugmentation program began in Lake Harmony, a second sonar scan was completed to evaluate progress. Between the 2017 scan and the 2018 scan, there were significant changes in Lake Harmony’s characteristics that suggested that Clean-Flo’s program had benefitted the lake dramatically.

The contour map produced by the 2018 scan showed that the deepest point of Lake Harmony had increased to 14.97 feet. Additionally, the area encompassed by the 14-foot contour had increased significantly. The eastern and northern sections of the lake also increased in overall depth. More specifically, the deepest portion of the eastern section now reached 11 feet.  The area encompassed by the six-foot contour in the northern portion of the lake had also moved significantly to the north.  The net result of changes to the bottom contours was an increase in the lake's total volume.  In 2017, the sonar test revealed that Lake Harmony’s overall volume was 910.22 acre-feet.  In 2018, that value had increased to 940.12 acre-feet, representing a 30 acre-foot (9.7M gallon) increase. 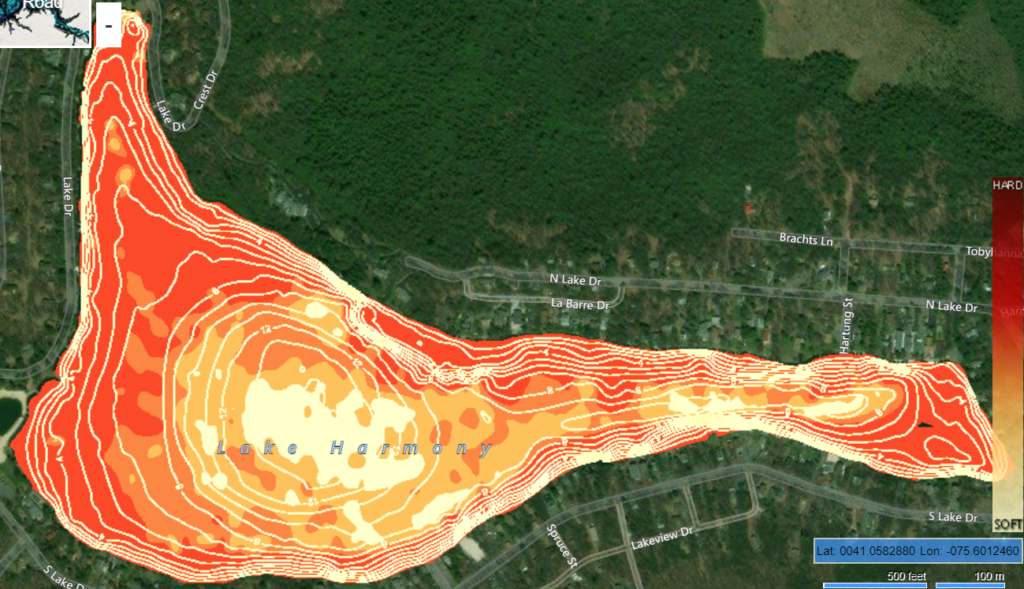 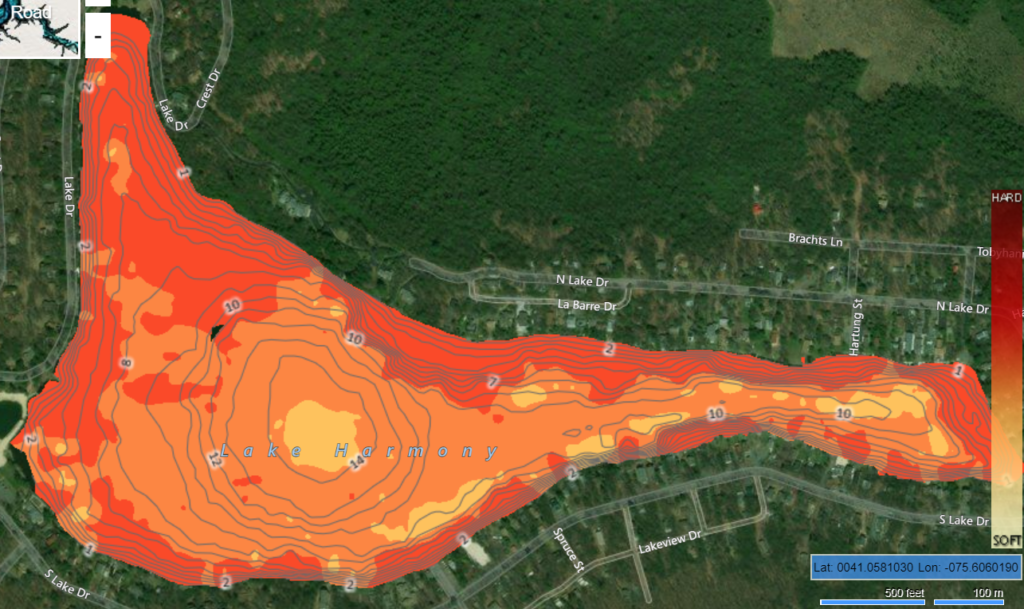 There were also notable changes to Lake Harmony’s bottom composition. The amount of soft bottom had decreased from 11% in 2017 to 7% in 2018. Similarly, the amount of medium bottom decreased from 69% to 66%, and there was significant growth in the proportion of hard bottom sediment, which increased from 20% to 27%.   These changes taken in tandem suggest that more aerobic bacteria are present in Lake Harmony’s water, which are more effectively decomposing the organic sediment and countering the lake’s muck buildup.

While Clean-Flo’s aeration system had only been operational for a few months, Lake Harmony has continued over subsequent years of operation to see deepening and volume growth, organic sediment and muck reduction, and overall improvements to its ecological health.