Solutions for Neutralization of Acidic Lakes 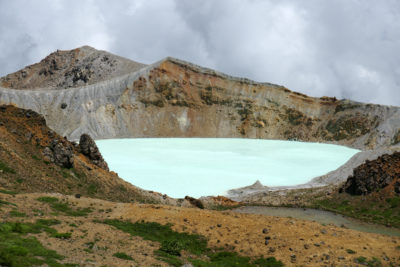 If acid lakes can be neutralized without lime or other chemicals after they enter the lake, acid deposition becomes an asset by adding essential water hardness to the water. This may seem radical at first but should become obvious when explained.
What is little known is that lack of oxygen at the bottom of acid lakes creates an environment favorable to anaerobic bacteria, in which the anaerobes produce acids in the lakes. One example of many is the anaerobic oxidation of hydrogen sulfide, utilizing carbon dioxide to form sulfuric acid and formaldehyde. Acid production at the sediment water interface is in addition to, and is independent of, acids entering the acid lakes by precipitation.

Is Liming a Solution for Acid Lakes?

Liming of acid lakes is the common solution to the problem. But it is only a temporary fix for the result of the problem. This is like taking an aspirin tablet to cure a headache when the real problem is a brain tumor. The cause of the problem is not addressed. CLEAN-FLO International has engineered and developed a complete lake restoration program designed to reverse the acidification of lakes. This process not only removes the acids as they come into the acid lakes from rain and groundwater but also prevents the production of acids at the bottom of lakes. Liming temporarily neutralizes lakes but does nothing about these two causes of the problem. The problem soon returns.

Acid lakes are the result of carbonic acid, nitric acid, and sulfuric acid. The CLEAN-FLO process of acid lake restoration first neutralizes the acidity of the lakes through a process called Continuous Laminar Flow Inversion and Oxygenation, a process of continuous lake inversion and lake aeration from surface to bottom. In this process, carbon dioxide in carbonic acid is exhausted to the atmosphere. Nitric acid is reduced facultatively (at low oxygen levels) by bacteria called pseudomonads, using nitric acid as an electron donor and carbon in the sediment to produce nitrogen gas, carbon dioxide, and water. The nitrogen and carbon dioxide gases are exhausted to the atmosphere, leaving a lake free of carbonic acid and nitric acid. Sulfuric acid can be reduced to elemental sulfur by a variety of aerobic bacteria.

Oxygenation as a Solution for Acidic Lakes

The present condition of Sweden’s and Norway’s acid lakes and of acid lakes in the northwestern United States perpetuates an environment which is neither favorable for aquatic plants nor aquatic animals. By oxygenating the bottom water and getting rid of anaerobes and the toxic gases that they produce, the acids at the acid lake bottom are eliminated, and instead, an environment favorable for aquatic fish and insect life results, with limited aquatic plant growth.

Continuous Laminar Flow Inversion and Oxygenation exposes every drop of water in the lake to the atmosphere several times a week. This exposure to the atmosphere releases the carbon dioxide in carbonic acid, much the same as a bottle of pop water releases carbon dioxide when you shake it. We have given a simple demonstration for students, having a student blow into a glass of water with a straw to produce carbonic acid, measured the pH, and used a food blender to agitate the water. After blowing into the water, the pH became acid. After stirring the water, the pH became neutral.

As an alternative, one can perform a simple test by measuring the pH of a bottle of carbonated water (weak carbonic acid), then shake it and measure the pH again. As carbon dioxide is exhausted to the atmosphere, pH of the water increases.
While the nitrate in nitric acid is converted to nitrogen gas and water by inversion in combination with microbial action at the lake bottom, it is important that the nitrogen gas be exhausted to the atmosphere without turbulent mixing to prevent nitrogen toxicity to fish. Our process does this well.

It is absolutely impossible for hypolimnetic aeration to perform either of these tasks. In addition to the sulfur deposition from aerobic digestion of sulfates, once the inversion and oxygenation has conditioned the water so that larger aquatic fauna can live, sulfate becomes an important food source for these faunas.

We consistently get sulfate, nitrogen and carbonic acid reductions and increases in pH in acid lakes, even without lime. It is crucial however, that high dissolved oxygen levels be maintained at the sediment water interface and this has only been accomplished via Continuous Laminar Flow Inversion and Oxygenation. Acid lake neutralization cannot be obtained by liming alone, or by hypolimnetic aeration of acid lakes.

For a FREE estimate of your acid lake neutralization project, please fill out the questionnaire.