Lake Apopka is a 30,888 acre hyper-eutrophic lake located in central Florida. Once known for fantastic fishing, the lake had 28 fishing camps located around it. Decades of fertilizer and chemical use on properties around the lake have contributed excessive nutrient inputs that have devastated the aquatic ecosystem and have transitioned the lake from a clear macrophyte-dominated system to a turbid phytoplankton-dominated system. Large quantities of organic sediment have accumulated throughout the lake bottom, destroying fishing and ultimately ending the operation of all the fishing camps.

The State of Florida contracted our distributor Allied Group for implementing our inversion oxygenation and bioaugmentation in a 250 acre pilot area. The system was installed in August 2015. Prior to installation, comprehensive baseline water and sediment sampling was undertaken in May 2015, and then followed up with monthly sampling once the system was started. In December 2015, after only four months of operation, the data was gathered and analyzed by an independent consultant to determine if progress was being made.

The contour maps shown below represent the increase in water depth that has occurred between May and December.  The map on the left shows the bottom contours prior to the start of the project.  The map on the right shows the bottom contours after four months.   Each change in shade in these scans represents an increase of one foot in depth from the surface of the lake.  Lighter shades represent shallower water, and darker shades represent deeper water.  The scale at the right shows the feet depth associated with each color.  The map illustrates increases in the size of all contours, which is due to the decomposition of organic sediment on the bottom. 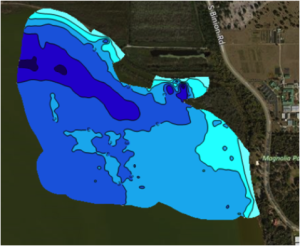 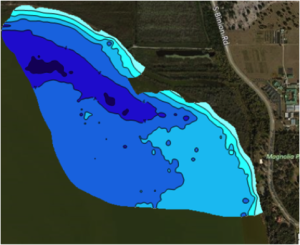 The maps below show the changes from red (dense vegetation growth) to blue (no vegetation growth) after 4 months. Additionally, the table below the maps quantifies the changes in aquatic vegetation biovolume. There was a substantial reduction in the highest percent cover categories (60-80%) from May to December of 2015. This is due to the ability of the laminar flow aeration system to affect the sediment pore water chemistry and limit the nutrients, in particular phosphorous and nitrogen, that are available to vegetation and algae. 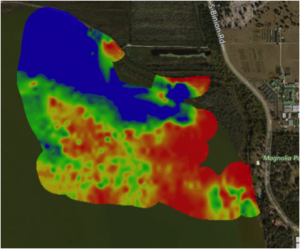 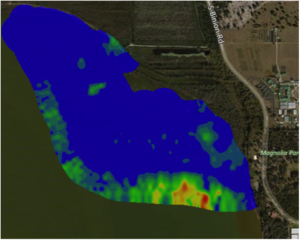 Overall, the project was tremendously successful at deepening the lake in the pilot area, increasing volume, and reducing nuisance vegetation and algae.  Furthermore, during its short period of operation, the project improved the overall ecology in the area.  Increased fish and wildlife populations were observed.  As fish moved into the area to take advantage of the fully oxygenated waters, fishermen also migrated in to enjoy better catches than in the rest of the lake.