Cleaning Up Polluted Lakes and Rivers in India

The US company CLEAN-FLO International won the Innovation in Environment Technology Award, sponsored by the Wisitex Foundation last March for its successful restoration of ten freshwater lakes in India that were heavily polluted by nutrients, such as nitrogen and phosphorus. The foundation is located in New Delhi and promotes tech­nology that solves problems in India. Technology that solves problems in India.

Ten years ago, CLEAN-FLO and French engineers used the same restoration approach using Continuous Laminar Flow Inversion and Oxygenation, to restore the highly polluted Helpe River in France, which won two environmental awards for the mayor of Fourmies. As a result of this and other CLEAN-FLO projects, the United States - Asian Environmental Partnership (US-AEP), introduced the technology to India.

"We identified this technology as most appropriate to clean India's grossly polluted lakes, reservoirs, rivers, and canals," said Captain Von Millard, the former India director of US-AEP "We brought CLEAN-FLO over on an educational exchange to address their technical solution to lake restoration ... a positive response was found," he added.

Millard's interest was first sparked when US-AEP in Washington sponsored a delegation of environmental scientists from Sri Lanka to India in 2001 to study a lake that CLEAN-FLO had restored near Mumbai. Kachrali Lake in Thane was a highly eutrophic four-hectare lake with algal blooms, and its surface was about 70% covered with water hyacinth. Bottom water was anaerobic, causing a massive release of phosphorus and nitrogen from the sediment along with objectionable odor.

The CLEAN-FLO Continuous Laminar Flow Inversion and Oxygenation System were installed in January 1999, and nitrogen and phosphorus-feeding bacteria were added a few weeks later. The lake cleared of water hyacinth and vastly improved over its original condition. Water hyacinth seeds at the bottom of the lake can no longer germinate because of the excellent water quality. As a result, the delegation of scientists from Sri Lanka wanted to inspect the lake to learn more about the CLEAN-FLO system.

The energy-efficient Continuous Laminar Flow Inversion and Oxygenation process enables various CLEAN-FLO biological products to perform their functions, as needed. Unlike ordinary diffused air systems such as surface aeration, paddlewheels, hypolimnetic aerators, or propeller-aspirator aerators, the process oxygenates an entire body of water from top to bottom. It oxygenates and rids the entire bottom of gases, including ammonia and carbon dioxide, which aquatic weeds and algae need for food.

The process duplicates natural spring and fall turnover of lakes. In tropical countries, natural inversion occurs at random with typhoons, cyclones, and torrential rains. Natural inversion oxygenates the bottom water and rids the water of toxic gases that accumulate in the stagnant water. Natural twice-a-year inversion of lakes is increased to several times a day or several times a week or month. The amount of inversion depends on a specific engineering design to counteract incoming pollutants and pollutants in a particular body of water. 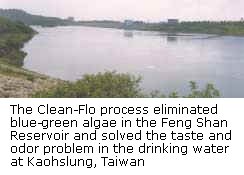 The process carries oxygenated, toxic gas-free surface water down to the bottom of the water body. At the bottom, oxygenated water binds phosphorus and nitrogen to the sediments and kills anaerobic, often pathogenic (disease-producing), bacteria that produce acids and toxic gases. Phosphorus and nitrogen in the water body is reduced three to twenty times as much as point-source watershed treatment can accomplish.

"India promises to be the first country in the world to restore its polluted lakes, rivers and reservoirs. To Indians, water is holy. Their desire is spiritual as well as intellectual." Robert Laing Clean-Flo International