Toa Vaca dam was built in 1972 to create an 836-acre raw drinking water reservoir in Puerto Rico. The maximum depth is about 174 feet. The intake tower for the water treatment plant has 6 intake gates, which are each about 30 feet apart. When built, the reservoir had a life expectancy of 300 years.  However, by 2009 the reservoir was highly eutrophic and fish kills were common. The utility's treatment plant was only able to use water from the top 2 gates without significantly increasing treatment costs. This created a significant problem because during the dry season when reservoir levels typically dropped below the first 2 gates. In general terms, reservoirs have limited vertical mixing, and when combined with a high residence time and nutrients like nitrogen and phosphorous, both blue-green algae and weeds find the perfect environment to dominate. Blue Green algae (cyanobacteria) have no natural predators and can move up and down the water column.  This characteristic, in combination with their ability to produce energy through photosynthesis, provides them with an important competitive advantage over other algae species. The treatment of raw water coming from a eutrophic reservoir is a real challenge. Oxygen-depleted zones at the bottom of the reservoir cause the migration of minerals like manganese and iron and nuisance gases like hydrogen sulfide and ammonia to the water column. Once at the drinking water plant, this water requires an increase of chlorine and lime dosing. This may increase to an increase in disinfection by products which are carcinogenic.

CLEAN-FLO designed a laminar flow inversion and oxygenation system for the reservoir and a treatment program for bioaugmentation. The system was installed in 2012. The bioaugmentation products were added approximately 4 months later. The system consisted of 14 diffusers and 35,000 feet of airline. A sampling program was established every two weeks in order to closely monitor the restoration process. Water quality parameters were analyzed at diffusers three diffusers that were installed at different depths (surface, half depth and three foot from bottom).  The parameters analyzed included dissolved oxygen, oxidation-reduction potential, hydrogen sulfide, nitrogen, phosphate, chlorophyll-A, and manganese. During the startup of the diffusers, a remote monitoring buoy was installed and operated in order to ensure that the emission of hydrogen sulfide gas was controlled. During the first year, the water level dropped over 70 feet due to drought. The diffusers are more efficient with depth, so the reduction in depth significantly affected the rate of oxygenation of the entire water column. As the depth increased, the pace of restoration improved.

There have been numerous positive outcomes of the restoration program:

These 3 graphs show the reduction in total phosphorus, total nitrogen, and manganese at the bottom of the reservoir after laminar-flow inversion-oxygenation system was started. 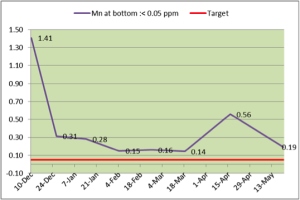 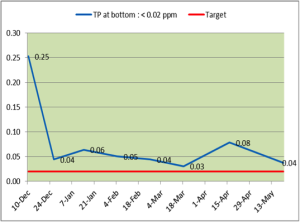 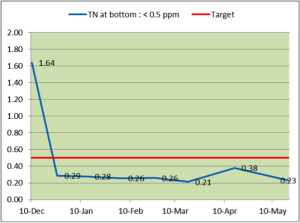 This project demonstrates the effectiveness of the Clean-Flo approach across a broad spectrum of applications.